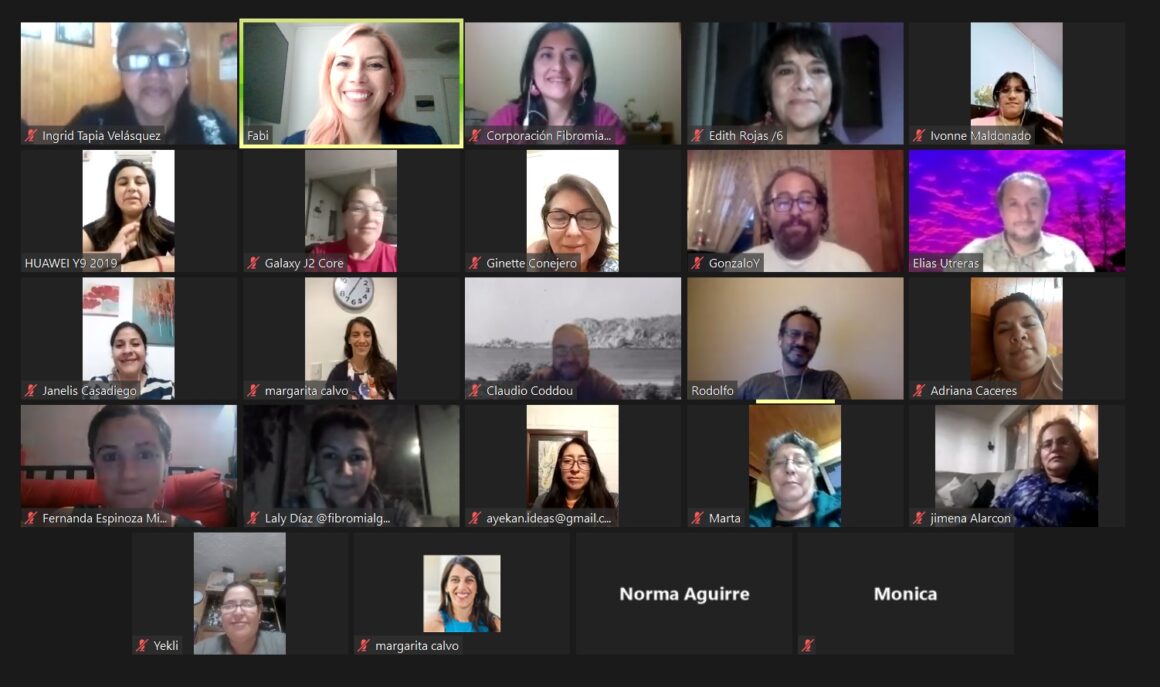 In collaboration with 8 groups of patients from all over Chile, this Millennium Nucleus began a work aimed to provide updated information on the most recent scientific and clinical advances related to fibromyalgia and chronic pain.

At just 13 years old, Lucía Segura’s life took an unexpected turn, “I started to have pain in the soles of my feet, then it went up to my knees and hips. In a short time it became so intense that I spent almost three months in bed», she said. They were the beginnings of fibromyalgia in her body, a condition described by the American College of Rheumatology as a «chronic disorder characterized by persistent, generalized, non-inflammatory musculoskeletal pain, accompanied by fatigue and sleep, memory, and mood problems». «Basically, fibromyalgia is a chronic pain that is in the four quadrants of the body, that is, in the upper extremities, in the lower extremities and in the central area, which includes the spine, thorax and abdomen,» explains the director of the Millennium Nucleus for the Study of Pain, Dr. Margarita Calvo.

Fibromyalgia is a pathological condition in which normally painful stimuli are apparently amplified by an alteration in the way the brain and spinal cord process these signals. «From the beginning this disease was terrible, because I went from being a super active person to being a person without energy, without the strength to get up because I felt pain in my muscles, in my bones, in my joints,» recalls Lucía, today of 39 years.

Lucía’s pilgrimage to obtain a diagnosis was also complex. «I saw many doctors and had many tests, but all the results came out good, even though I was feeling worse and worse», she says.

«It is a problem that is frequent in the population, we have recent studies in a healthy population in the Maule region, where we followed up and saw that international data on prevalence are the same in Chile,» explained Dr. Calvo, who is also academic at the Pontificia Universidad Católica de Chile and physician at the Pain Unit in the UC Christus Health Network.Regarding the diagnosis of this pathology, the specialist indicated that the complexity lies in the absence of a specific test to determine it. «Here’s no result or a number that allows us to diagnose, but it is done by the clinic, seeing the symptoms that the person presents».

That difficulty was what kept Lucía Segura for about 20 years without an accurate diagnosis of the disease that affects her. “Just in 2015 I was definitively diagnosed by a rheumatologist. Since then I began to look for the little information that is available about the disease and I began to realize that it is a pathology that is little visible to society in general, to medicine and to science”.

“It is shocking when they tell you that your disease has no cure, you just have to assume. I have had super complicated periods, with a lot of anxiety, depression, panic attacks, terrible headaches. There are days when I just want to be alone in a dark room, not listening to anyone”, she says.

She adds that «for people who are going through this situation or who have just been diagnosed, it is very important to have family support, good treatment and, above all, information,» said Lucía, today’s chair of the group «Fibromyalgia, Wellbeing and Therapies ”of Concepción.

Precisely this need to bring the scientific knowledge available on this disease is what motivated the team of researchers from MiNuSPain, together with professionals from the Chronic Pain Unit of the UC Christus Health Network and groups of fibromyalgia patients from all over the country , to generate a program of scientific and clinical dissemination on this pathology.

«For us it is very important to be able to transmit what we study in our laboratories, where we focus on investigating why it hurts, how it hurts and how we can alleviate pain,» explained the Director of this Millennium Nucleus. He added that «being connected with the patients who suffer from this pain allows them to access the knowledge that the laboratories are doing and, for us, better understand what are the things that are most important to continue studying,» he said.

Why is pain perception increased in fibromyalgia?

To understand what fibromyalgia is, it is essential to understand how living beings manage to connect with their environment and perceive all kinds of stimuli and sensations, says the Alternate Director of the Millennium Nucleus MiNuSPain and academic from the Universidad de Chile, Dr. Elías Utreras.

For this, the academic from Faculty of Sciences at the ‘House of Bello’ proposes an example: «let’s imagine that our body is like a radio, full of cables, resistors, transistors and other parts that allow us to control different functions.» He went on to explain that «in this case, we have a network of wires made up of peripheral sensory neurons that react to all kinds of stimuli from our environment through the senses and our internal organs».He explained that «these neurons connect, in turn, with neurons in the spinal cord and carry this information to the brain through electrical impulses that travel at about 260 kilometers per hour.» The scientist explained that in this way we can perceive the smell of damp earth, the taste of spicy food, the softness of velvet and everything we know about the external world.

But also pain, which acts as an alarm system against potentially harmful stimuli against the body, which is known as nociceptive stimuli. “In fibromyalgia there is a disorder of the nociceptive stimulus recognition system. However, it is still unknown what are the specific causes that cause it and in which part of this “wiring” this problem may be generating ”.

Regarding the work carried out in the Millennium Nucleus MiNuSPain on this matter, Dr. Utreras explained that “our research is focused on understanding nociception, which is the neural process by which harmful stimuli are encoded and processed and, continuing with the previous example, it is necessary to know how all the circuits of this radio work ”. The academic from the Universidad de Chile indicated that «once we understand this process, we will be able to generate new therapies and molecules that can serve as analgesics aimed at treating different pathologies associated with pain, such as neuropathic pain or fibromyalgia,» he said.

The program for dissemination of scientific and clinical knowledge for people with fibromyalgia promoted by MiNuSPain began with the first online talk entitled «Chronic Pain: Central Awareness and Scientific Advances», which convened about 160 people both from Chile and abroad, in around a live presentation in online format. “In this first talk we will focus on central sensitization, which explains why fibromyalgia is a disease where the whole body hurts. That we have investigated the laboratories and we already have enough answers as to why it happens. That is what we want to convey with these activities”, said Dr. Calvo.

Lucía Segura, president of the “Fibromyalgia, Wellbeing and Therapies ” group and one of the managers of this initiative, stated that “the dissemination of all aspects of this disease is very important to reach more patients who feel lonely and disoriented, such as I was when I did not know the diagnosis or what this pathology was going to imply, and thus help many patients and their families to make this condition visible ”, she explained.

What if we felt no more pain?

Together with Dr. Margarita Calvo, the first talk was led by Dr. Gonzalo Yévenes, academic from the Universidad de Concepción and Associate Researcher at MiNuSPain, who briefly explained about the influence of emotional factors on chronic pain, which includes fibromyalgia.

“Pain is complex from a scientific point of view and has a very clear association with human emotions. It always has a sensory component, related to the processing that the nervous system makes of the stimuli that we have in daily life; and another emotional one ”, he stated.

The academic also stated that «as humans and as mammals we need to feel and that is done by the central nervous system through an interconnected processing network of neurons in our central nervous system and in our brain.» He added that «pain protects us, serves as a warning that there is damage to our body and helps us to some extent to regain our physical integrity.»

The lack of this «alarm system» of the body could lead to death. Such is the case of people affected by some genetic defects that prevent people from feeling pain. «No more than 20 years ago, human beings have been discovered to have genetic channelopathies, which are defects in specific proteins of the nervous system, which present with complete insensitivity to pain.»

The consequences of this are catastrophic, as was the case of a fakir boy from the Pakistani city of Lahore, who performed street theater by piercing his body with knives and walking on burning embers. Far from becoming a real life superhero, this led to his death a few days before his 14th birthday, when he fell while trying to jump from the roof of a house, “it was so much his isolation from the sensory system that it was very risky ”, commented Dr. Yévenes.

From that case, science began to investigate “a group of specific genes that are expressed in the sensory system and that are extremely important for pain in humans. Probably, the study of these genes will allow the generation of new analgesic drugs in the future ”, concluded the Universidad de Concepción’s academic.