Is it important to study pain in Parkinson’s disease? 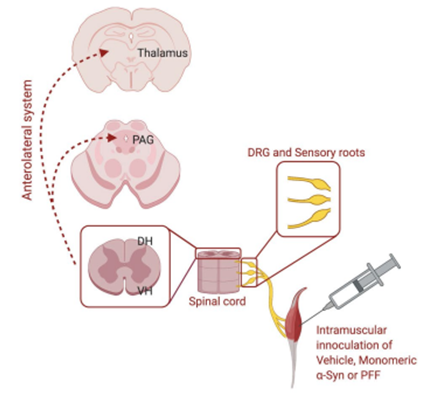 Parkinson’s Disease (PD) has traditionally been considered a neurodegenerative disease with motor involvement associated with the accumulation and misfolding of the protein alpha-synuclein (aSyn). However, non-motor symptoms such as thermal and mechanical sensory dysfunction, as well as a considerable decrease in intraepidermal nerve fibers, are becoming more important in these patients; It remains unclear how aSyn misfolding could affect these symptoms.

Interestingly, when these researchers used an experimental model of this disease involving intramuscular injection of aSyn preformed fibrils (PFF), they found that aSyn is able to:

b) Cause neurodegeneration of sensory pathways

This represents a possibility of using aSyn transgenic models to understand molecular mechanisms related to pain in PD in the search for new therapeutics in the non-motor symptoms of these patients.